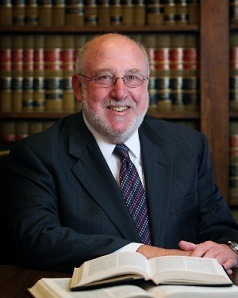 Recently recognized for 50 years of service by the Nassau County Bar Association, Mark has been practicing law since 1966 after earning Juris Doctor and Bachelor of Laws degrees at Brooklyn Law School in the City of New York, subsequent to his graduation from City College of the City of New York in 1963 with a Bachelor of Business Administration degree. Mark Nathanson is the true community General Practice attorney. The same clients will seek his advice and guidance in the purchase or sale of a home, formation of a small business, drafting of wills, trusts, living wills, health care proxies, powers of attorney, representation in their parents’ estates and will refer Mark to their friends, neighbors and associates.

Over the years, Mark has grown his client base the old-fashioned way: referrals via word of mouth. Many new clients can be traced by degrees of separation to his clients from the 1970s and 1980s. It is common practice for Mark to represent homeowners when they sell their house of many years, after first being introduced to Mark at the closing of their purchase years earlier when he was representing the sellers in that transaction. They remember him even though he was not their attorney, but his presence made a lasting impression. It is also not uncommon that both sides to a transaction will desire The Nathanson Law Firm LLP to represent them, only for Mark to have to refuse representation of an existing client in the purchase or sale of real property due to a conflict of interest, as he has already been retained by the opposite party, who themselves are returning clients!

Much of Mark’s efforts representing clients are behind the scenes, dealing with other attorneys on transactional matters. Clients likely do not even realize the extent of the effort, energy, problem-solving skills, dedication, time and attention given to them, as all they experience is smooth sailing from their perspective! Mark solves the problems his clients don’t even know they have.

Mark solidified his reputation as a fair and honest counselor and attorney by dealing with his peers in a non-adversarial manner, while serving his clients to his fullest capabilities. The respect and admiration of his peers has earned him the highest “AV” ranking by Martindale-Hubbell annually. Mark’s skills were honed during his years as a partner with Landa, Picard & Nathanson and thereafter with Nathanson, Devack & Memmoli, prior to forming a partnership with his son, Mitchell, The Nathanson Law Firm LLP, in 2004.

In the first floor lobby of the District Courthouse of the County of Nassau on Main Street in Hempstead, New York, you will find a plaque recognizing the years Mark voluntarily served as an Arbitrator in night small claims court, alleviating the caseload on the docket calendar, so that the judges, litigants and court personnel could arrive home to their families at a reasonable hour. In fact, Mark and his son, Mitchell, are believed to be the only father and son to have served simultaneously as volunteer Arbitrators in the Nassau County District Court.

Mark has always been very active in the local community, officiating as Chairman of the Board of Directors of the Hebrew Academy of Nassau County and twice serving as President of the Young Israel of West Hempstead, in addition to volunteering for many years as a member of the Board of Trustees, General Counsel and Parliamentarian.

Many clients are unaware of the existence of unclaimed funds being held by the State and Mark is adept at locating this “found money” and assisting in its recovery. But please, don’t ask him to do so, as he enjoys the element of surprise in sharing the good news of his unsolicited act.

He does like to repeat the same jokes over and over, but few people remember them. Although an avid golfer, Mark is not quite ready to quit his “day job”. He has passed along his vast experience of over 50 years to his son and partner, Mitchell, and yet still manages to learn something new every day.

Update: Mark has recently retired and loves to hear from old clients.

Client Reviews
★★★★★
Mitchell Nathanson was a pleasure to work with. He represented me with class and respect. I highly recommend at least doing a consultation with Mitchell to see what he is all about. The care he shows for his clients and his dedication to making sure they reach an agreement that his client can be happy with is something to be admired. Gabriel
★★★★★
High quality legal work at an affordable price. Initial consultation discussing desired legal services and potential charges. Established a timeline to complete the work. Legal work was completed promptly at the price discussed in the initial consultation. Professional, itemized billing statement describing services and charges. Eric
★★★★★
Mitchell Nathanson is a rarity these days. He is a true professional who does what he says and works hard to get the job done right the first time. You get what you pay for and, with Mitch, you get a highly qualified attorney who puts his clients first. It is definitely worth repeating, Mitch gets the job done right the first time. Michael Augustus
View More
Submit a Law Firm Client Review